In 1997, Mr. Strong Guo began making his own brand of bicycle frames. In the first year of operation, he distributed more than 500 frames and complete bikes. During this time he began to design his own frames and outsourced the manufacturing, but subsequently built his own factory.

Matrix Cycles now builds and designs bicycle frames to the highest quality with strong materials and has recently expanded its traditional market place, being Malaysia, Thailand, Singapore, Hong Kong and the Philippines in to mainland Europe.

We also design, manufacture and distribute a variety of bicycle components, such as carbon and aluminium wheels, handle bars, hubs, stems.

Matrix Cycles continues to grow and now has an international distribution with around 20,000 frames being sold and supplies equipment to United States and European based professional cycling teams.

Matrix has now arrived in the UK and Ireland – it’s about time! 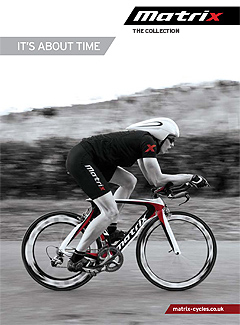